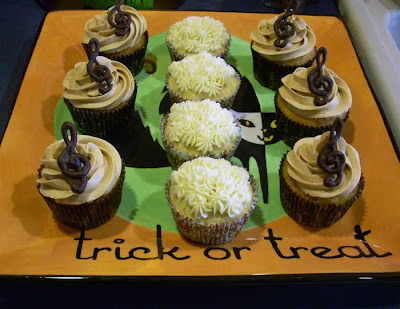 I've been brainstorming for over a month trying to come up with French-themed cupcakes ever since my mom commissioned me to make some for her book club meeting. While France is known for its impressive pastries and elegant desserts my specialty is cupcakes so I wasn't sure my limited skill set could handle something so advanced. Instead why not translate the delicious flavors of traditional French desserts into cupcakes?

For the first flavor I decided on another batch of the Opera Cake Cupcakes I made back in September. Sponge cake made with almond meal, soaked with coffee syrup, bittersweet chocolate ganache filling, and coffee buttercream on top. Somehow these turned out even better than I remembered the first batch being with the bottom layer nicely saturated with the coffee syrup. Although the origins of opera cake are a bit unclear I stuck with the musical theme from both the name and from the book being discussed and piped out some treble clefs using melted chocolate. I simply printed out an image of one from the internet, stuck it beneath a sheet of wax paper, and piped on top. They look more impressive and difficult to make than they actually are.

I struggled to come up with a second flavor and it wasn't until I re-read the book to be discussed that I got the idea to make madeleine cupcakes. Madeleines are light little cakes made in a specific type of pan, usually with almond and citrus flavors. My trusty 125 Best Cupcake Recipes book happened to have a recipe for madeleine cupcakes made with orange zest and powdered sugar in place of granulated. My real moment of genius came when choosing the frosting to pair with the cake. I happened to have gotten two gourmet teas as a prize when I won Sweetest Kitchen's tea-themed cupcake competition and one of those teas was an Earl Grey lavender tea. What could be more French than lavender? Even better that it has hints of bergamot to bring out the citrus flavor of the cake. Following Cupcake Project's tips for infusing butter with tea I was able to make a pure-looking frosting nicely infused with the tastes of Earl Grey tea, lavender, and bergamot. It worked perfectly with the cake, which, in its traditional form, is something I imagine is often eaten with a nice cup of tea on the side.

The cupcakes were a hit and everyone couldn't stop raving about them. Wish they'd enjoyed the book half as much.

9 tablespoons unsalted butter
10 teaspoons loose lavender Earl Grey tea
1 1/2 cups confectioner's sugar
1 1/2 to 2 tablespoons heavy cream
1. Melt butter in a saucepan over low heat. Add loose tea and continue to cook for five minutes.
2. Remove pan from heat and let sit five minutes. Pour through a fine strainer, pressing on tea leaves with the back of a spoon to squeeze as much butter out as possible.
3. Let butter sit until it comes to room temperature and solidifies. If you're in a hurry you can place in the refrigerator but make sure butter is at room temperature before the next step.
4. Using a mixer, beat the butter and powdered sugar until combined. Mixture will be dry.
5. In half tablespoon increments, add heavy cream until frosting comes together and loses the dry, crumbly texture. Beat until smooth. 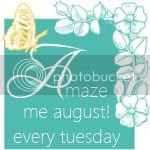 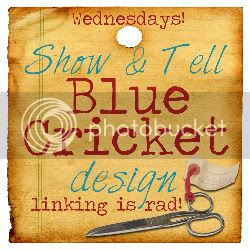 Posted by Lina Thomlinson at 8:42 PM

Wow, both cupcakes look amazing. I am interested expecially in the Madeleine cupcakes -- they are so cute and fluffy. Joni

These are both beautiful. I love the treble cleff on the cupcakes. I would love either.

Beautiful...as always! Thanks for sharing on Cupcake Tuesday!
~Liz

I never used almon flour. MMM. have to try it. Your cupcakes are so pretty.

They sounds wonderful, just like all the others! I bet your mom's book club was/will be a HUGE success! Thanks for linking up to Topsy Turvy Tuesday's!