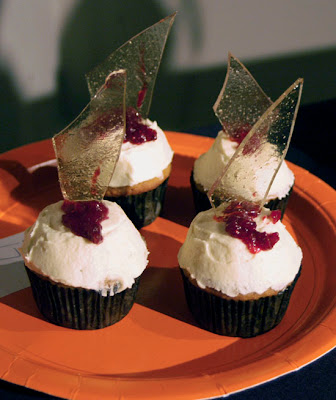 A Photo A Day [Day 62]
Although I'm trying to get over my miserable failure at today's local Iron Cupcake: Moorestown competition where I didn't even place, I figured I'd post pictures of my entry here for your enjoyment. I honestly don't get what the judges are looking for in these things because my cupcakes tasted amazing and, at least in my eyes, looked great. It's really disheartening to lose to a cupcake that tastes like the frosting came from a supermarket shelf while I slaved away last night and this morning to make homemade dulce de leche for my filling and frosting. Not to sound too catty and bitter about the whole thing, but the disappointment's definitely there.

The themes were "pumpkin" and "Halloween" so I made another batch of the astoundingly delicious dulce de leche pumpkin cupcakes I made last week (see that post for the recipe). They're moist pumpkin cake filled with homemade dulce de leche topped with dulce de leche buttercream.

For those of you concerned for the welfare of my kitchen after my last disastrous attempt at making dulce de leche, I can say that third time's the charm for me when it comes to making the stuff. Scared off of the oven method, I made a double batch last night on the stovetop using a double boiler, stirring occasionally. It worked like a charm even though it took over three hours of cooking, but at least I was able to leave it unsupervised for the most part. Unfortunately I managed to mess it up by cooking it too long so this morning I woke up to a giant blob of hardened caramel stuck in the bowl. The bowl was only $1 so I'm tempted to just throw it out rather than clean the darn thing. This morning I went back to the oven method of pouring the condensed milk into a pan, covering it with foil, placing it in a water bath, and heated it at 425 F for a little over an hour. No accidents this time because I omitted the baking soda and watched it like a hawk.

For the cupcakes' Halloween decorations I went against my husband's advice to stick with cutesy since the family-oriented crowd might not go for gory. While I love what I came up with maybe I would have had a chance of placing if I'd listened to him. Anyway, I took the idea from A Zombie Ate My Cupcake by Lily Vanilli. The recipe I used made far too much "glass" so next time I'd halve the recipe below. For the "blood" I boiled down some cranberries in water with lots of sugar and pulsed it into a blender until the cranberries were all broken up. You could go the easy way out and use pureed cherry pie filling or raspberry jam.

Even though I didn't even place, the crowd seemed to love mine. Everyone kept stopping to check them out, take photos, and they were the first ones to run out once we were allowed to sample the goodies. Still, I'm dismayed that I spent all that time making the silly decorations and made some damn fine cupcakes and still didn't come close. 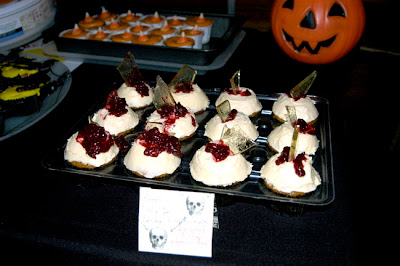 (You may want to halve this recipe)

Nonstick spray
2 cups water
3 1/2 cups sugar
1 cup light corn syrup
1/4 teaspoon cream of tartar
1) Line a large cookie sheet with foil or a Silpat and spray with nonstick spray. Spray the pan at least 30 minutes prior to using it.

2) Mix together the water, sugar, corn syrup and cream of tartar in heavy saucepan and bring to a boil with a candy thermometer inserted. Let the mixture boil, stirring continuously, until it reaches 300 F (this step took me nearly 40 minutes, grrr). Pour the mixture very quickly and carefully onto the lined and oiled pan. Spread evenly and let cool.

3) When the mixture has cooled completely, carefully pop it out of the pan and peel off the foil or Silpat. Tap it in the center with a hammer or meat mallet to crack it into shards.


Since I love Halloween so much I did enjoy seeing what everyone else came up with. Although most of the entries were cutesy there were some that caught my eye. 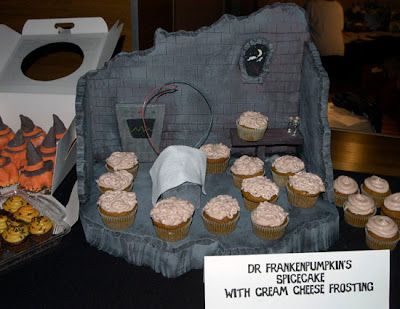 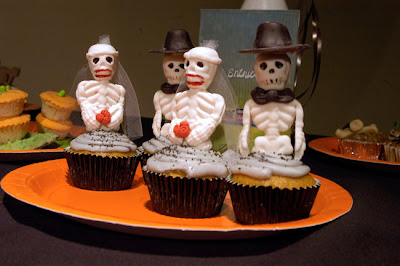 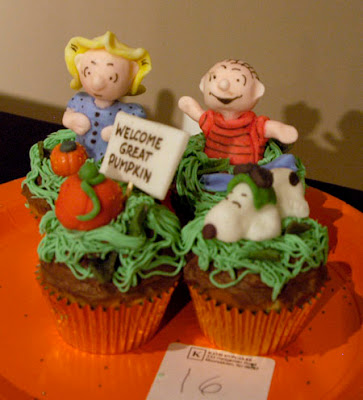 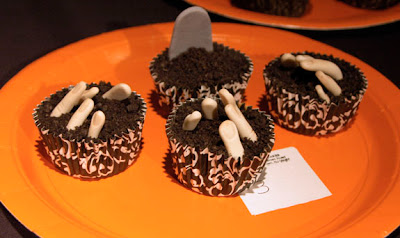 Edited to add:
Someone else got a good picture of the winning rat cupcakes. They're definitely impressive, both in concept and in execution, so I can see how they won. I guess my style of focusing more on the taste of the cupcakes and not wanting to complicate that with fussy decorations doesn't really work in these competitions. Which is a shame because it seems like my tastes runs toward simple and understated, not just in cupcakes but in clothes, design, etc. I doubt I'll ever be on board with taking all that time to decorate something that will be demolished in minutes. 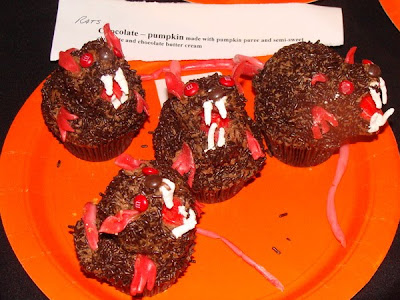 Posted by Lina Thomlinson at 5:25 PM

I feel your pain - I have competed in three IC competitions and often feel really confident and my cakes get lots of attention and then I don't come in the top three. The last one I came third and the winner looked impressive but tasted bland.
Your cupcakes look awesome and obviously took a lot of skill to make the glass. I made some pumpkin cupcakes this week but the dulce de leche sounds like a delicious addition! Hmmm!

Your cupcakes looked amazing! I didn't have a chance to sample them since they were all gone by the time I was done emceeing the event--I always love the ideas/creativity you bring. I wouldn't want to be a judge at these events--it must be tough-don't think I'd want to be a baker either, lol. I think that's why I stick to Host! Anyway, just wanted to tell you how amazed I was at your awesome cupcakes-great job!!!

Your cupcakes look terrific. I LOVE the glass, have not seen anything like them, and I bet they tasted wonderful. I'm going to try making these next year. Thank you!

I feel your pain too. I am not nearly as talented as you, and I have never entered a competition before, but I helped my daughter with a Chocolate "heart of darkness" Truffle Cake for her company bake off and after 3 days of tweaking up our recipe, whipping bowls of ganache and shredding chocolate curls WE LOST because some people thought we cheated and bought it. aaarrrgghh!

I am dying to try the pumpkin cupcakes. Luckily I have a can of dulce de leche in the cupboard. I had to go to 3 stores to find it last time I wanted to make a caramel apple pie, so I bought extra. I have read about the recipe where you boil the unopened can of sweetened condensed milk for 3 hours. That sounds too scary for me. Might try the oven method next time though.

I think they look great-very clever! & I'm sure they tasted even better! Now following from the Friday blog hop!

Oh wow, I know its WAY PAST Halloween but would you still link these up girl, the cupcakes are freakin awesome. DOn't know how I missed them, good job, I love them.

I will add them to the halloween party when I get a chance, for next year, hehe, gotta have this. :)