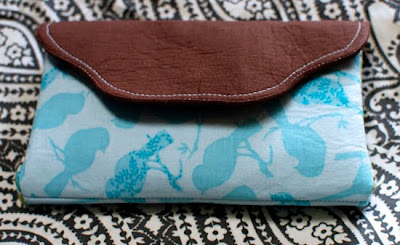 Confession time: I tend to wing it when it comes to interfacing. If a pattern calls for a specific type of interfacing I usually can't find it in stock at my local Jo-Ann Fabrics so I don't even bother looking any longer. Instead, I keep a supply of several types on hand at home and use the one I think most closely matches what the pattern requires. This tactic usually works out just fine for me, until this pattern, that is.

The pattern itself is pretty easy to follow and is similar to the jewelry roll I previously made from One Yard Wonders. There aren't many diagrams and while I would have appreciated a few more to guide me through certain steps, the written instructions do a good job of explaining it all. Aside from the difficulty of sewing around the curves of the flap it's a very easy beginner pattern. 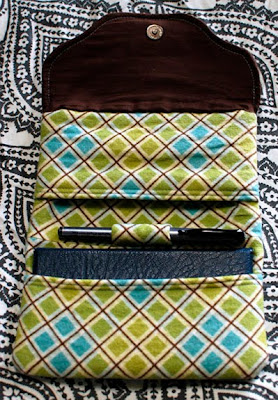 So here's what I screwed up: I used Peltex for all of the outer pieces including the flap and no interfacing on the interior lining panels or interior flap. I actually think that was a fine move if I'd done a better job of trimming the thick interfacing down so it wouldn't be in the way of the seams. Also, I did interface the inside pocket panels and think that added a ton of bulk to the finished product, making it a little too thick and bulky when folded up. I'm not sure I'd have the room in my purse to carry this around in addition to a wallet. I also wasn't able to properly do the topstitching in the final steps because of the bulk on the flap so mine's a little different looking than the one in the book.

Again, those problems were all due to my own changes and blatantly ignoring the instructions so I'd be curious to see how much better this would turn out if I'd done everything according to plan. As it is, I like it well enough to give as a gift as I intended but I think next time around I'd try to learn from my mistakes and make an even better version.

As usual, I didn't bother to use home decor fabric, instead substituting some quilting cotton on the outside and flannel on the inside. All fabrics were from Jo-Ann Fabrics. Since I'm in a confessional mood I'll also admit that while the exterior bird fabric was from my stash I did buy the interior fabric yesterday specifically for this project. I simply couldn't come up with an appealing enough combo from my existing fabrics and figured since it's a gift I could justify spending the $1.

It's not even April yet and I've already completed that month's project in My Crafty Crap's and JemJam's Style Stitches sew alongs. Yay!

Edited to add: I was feeling guilty about foisting a sub par item off onto a friend so I quickly made a second one using the same fabrics. I did a much better job trimming and lining up the Peltex, used regular interfacing on the flap pieces, left the interfacing off of the interior pocket panels but did interface the interior lining panels. I'm not sure if it's because I used flannel on the inside or if the pattern simply calls for too much interfacing but I certainly didn't need to interface those pocket panels. Any more interfacing would have been overkill.

I'm still not 100% happy with the results as it's very bulky but it does fold up better than my previous version. I also had a ton of trouble with the topstitching in the final steps as the needle could barely plow through at some spots and at the edges the bulk wouldn't even fit under my sewing machine foot. While this pattern makes a pretty little checkbook cover that sews up quickly (even more quickly the second time around, I can report) I'm not sure how often I'll use it in the future. 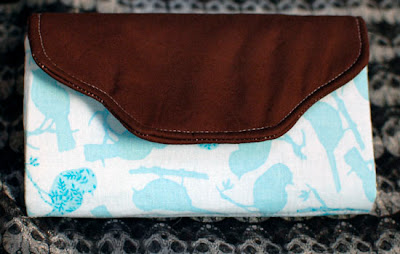 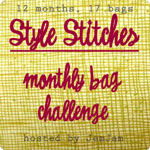 Posted by Lina Thomlinson at 4:57 PM

Your cover looks great. The brown fabric looks like leather in the photo. It's not though, right? I'm with you on interfacings. I go about picking them just as you do. My local stores don't carry the ones mentioned in the book. I too wish there were more illustrations in the directions as well. I haven't made this one yet so I'm glad you have posted this as a heads up. Thanks.

Beautiful! What is that bird fabric, it's so pretty! Sorry you had trouble with the interfacing, sometimes that Peltex is a real $%&@#

I agree on the interfacing - sometimes the one in the supply list is no longer available or now goes by a new name... I have a stash and I pull from it whenever possible, too!
I think I'll stay away from the PELTEX for this one! Thanks for blazing the trail!

They both look great! I'll have to keep this in mind when I make mine, I'm terrible about following directions about types of interfacing more than anything else.

I haven't read through the pattern yet (bad, I know!) but usually when I use Peltex I cut it smaller so it won't be in the seams at all, then use a really light-weight interfacing over it to hold in place. It really helps keep the seams from being so bulky.

Bree that is a wonderful idea...I will try this when I tackle the project...