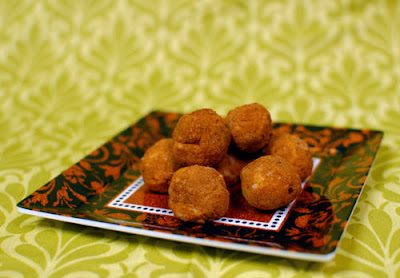 I'm guessing that if you're not from the Philadelphia area you'll assume from the title that this post is about vegetables. Yuck! Guess again! C'mon, you know me better than that. I don't run a health food blog.

I'd never heard of Irish potatoes until we moved to southern New Jersey and I spotted some in the bakery section of the grocery store as St. Patrick's Day approached. Curious, I inspected the ingredients list and discovered, to my joy, that Irish potatoes are actually a confection made with a sugared cream cheese and coconut mixture rolled in cinnamon to resemble tiny potatoes. The recipe is so simple that I have no excuse for not making these sooner. Even worse, we usually break down and buy some from our favorite bakery every year.

Several people online commented that these are like coconut frosting rolled in cinnamon, and that's not far off the mark. Keep these small as the sugar factor can become overwhelming after a few bites. I made a few changes to the recipe I found online including chopping the coconut a bit before adding it in. Some people weren't fond of the stringy texture so I eliminated some of those longer pieces by chopping them up. It's not a necessary step but a good idea.

As you can see from the picture above, they're not the most attractive treats but they are a delicious St. Patrick's Day tradition.

Posted by Lina Thomlinson at 6:55 PM