Yesterday's Irish potato post was but a precursor for something greater: Irish potato cupcakes. I took the flavors of Irish potatoes, turned them into a cupcake, and then stuffed each one with a fresh Irish potato. I'm happy to report that my crazy little experiment turned out even better than I'd imagined! 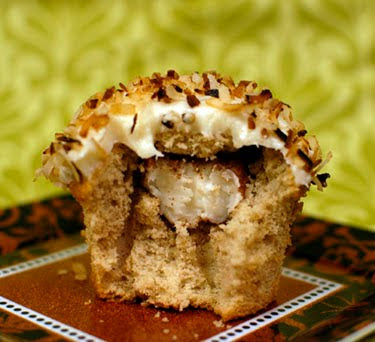 I used my favorite vanilla cake recipe and added a heaping serving of cinnamon and whipped up some cream cheese frosting and toasted coconut for the topping. The Irish potato nestled in the center ties it all together perfectly even though it does make the cupcake a little structurally unsound. I recommend eating this one with a fork and after a few bites you should expect it to fall apart a bit. I'm guessing this is because the filling's cinnamon coating keeps it from being sticky enough to hold it together. It's not a huge problem but I thought I'd let you know in case you're trying to eat one on the run. And be warned: this cupcake is a sugar bomb. You'll need a tall glass of milk or a gallon of water to wash it down. 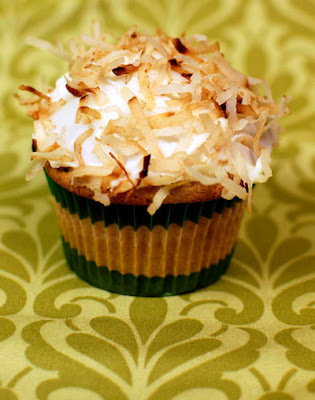 2) In a large mixing bowl, whisk together the sugar, flour, baking powder, cinnamon, and salt.

3) Add the butter and beat with an electric mixer at low speed, until the mixture looks sandy.

4) Combine the milk and vanilla and add, all at once. Mix at low speed for 30 seconds, then increase the speed to medium and beat for 30 seconds. Scrape the bottom and sides of the mixing bowl.

5) With the mixer running at low speed, add 1 egg. Increase the speed to medium and beat for 30 seconds. Add the second egg, again beating for 30 seconds.

6) Scrape the bottom and sides of the bowl, and beat briefly, just till smooth.

8) Bake the cupcakes for 23 to 25 minutes, until they've domed, and are a light golden brown around the edges. They'll spring back when pressed gently on top, and a toothpick inserted in the center will come out clean.

10) For the filling, whip up a batch of Irish potatoes and make 12 of them larger than usual, about 3/4". The recipe will make much more than you need for the cupcakes so enjoy the leftovers or make a quarter of the recipe and you'll have enough to fill the cupcakes. Using the cone method fill each cupcake with a large Irish potato.

Toasted Coconut Cream Cheese Frosting
1 cup flaked coconut
1/4 cup unsalted butter, at room temperature
4 ounces cream cheese, at room temperature
1 teaspoon vanilla
1 tablespoon heavy cream
3-4 cups powdered sugar
1) In a pan over medium heat, toast coconut by stirring constantly until light golden brown. Remove coconut from pan and place in a bowl. Set aside.
2) In a mixer, cream butter and cream cheese. Add vanilla and heavy cream and beat until combined. Gradually add powdered sugar and beat until mixture reaches desired consistency. Since you won't be piping the frosting it can be a little soft.
3) Spread frosting generously onto cupcakes using a spatula or flat knife. Dip the top of each cupcake into the bowl of toasted coconut, coating completely.

Posted by Lina Thomlinson at 9:00 AM

Okay, I'm behind on my blog reading, so I read this before your Irish Potato post & was confused - "Why in the WORLD would you stick a hunk of potato in a cupcake. That's so not her!" Then I figured it HAD to be something else, so glad I was right! These do look good!

These look soooo awesome. I love your creative and delicious idea. Thanks for linking this up to Sweets for a Saturday.

How interesting! I've never seen anything like this before! I'd love to try one!

What a neat concept! I've never heard of a potato cupcake before, but I looove potatoes.

These look lovely and I sure am glad I went back a post and realised these weren't actual potatoes :)