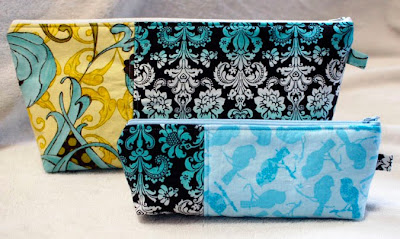 I used to be the most organized, on top of everything sort of girl. I'd remember complete grocery lists without needing to jot down a single item, I knew the balance of my bank account down the the last penny without having to look it up, and I never, ever forgot anyone's birthday. Things have changed a lot in the past few years, especially in that regard. I suspect it's because my life has gotten more complicated since then, that I have more people and responsibilities and tasks to keep track of and my tiny little brain just can't handle it all. Now I have a horrible habit of letting people's birthdays sneak up on me and even if I know one's coming up I can't motivate myself to start brainstorming present ideas until the last minute.

I realized on Wednesday that I have a friend whose birthday is coming up next week. Since I'd just gotten done making my first batch of Origami Bags for myself I figured it wouldn't be too difficult to churn out a few more as gifts. Oh, how wrong I was!

In my first review of the pattern I neglected to mention how surprised I was that these took so long to sew. We're talking hours for just one bag. It's not as if the pattern pieces are that intricate to cut out or that there are any fancy sewing skills required. Yet it seemed to take forever. I wrote it off as being due to my unfamiliarity with the pattern but this time around I really noticed the problem since I was trying to cram in all of the sewing in one weeknight. I only got one bag sewed Thursday night and finished the smaller one last night. I doubt this will become my go-to zippered pouch pattern for that reason alone. The end result is cute but it's a bit too labor intensive for something I might like to mass produce as gifts.

I also had a terrible time with the gussets again despite my using the same pin trick. Perhaps that's because it was late at night and I wasn't fully on top of my game. I had to re-do the interfaced corners a few times until I got it right. 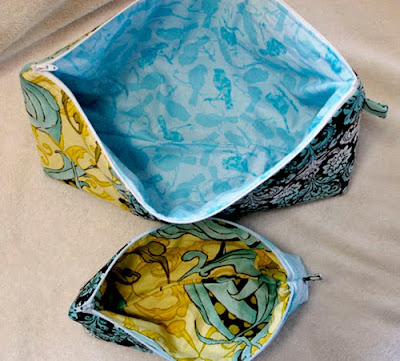 Despite all of the difficulties I'm really pleased with the bags. I stuck with the same color combo as before but swapped in a more mature fabric since I know my friend doesn't have the mentality of a ten-year-old. No crazy-eyed bunnies for her. I once again made a large bag since someone accidentally cut out two extra yellow panels last time around and I paired the large with a mini bag. I have to say, I quite like the mini size and might have to make one for myself. It might be even better suited for carrying around my daily necessities than the small bag I'd previously made.

Now it's off to the post office to get these babies in the mail!
Posted by Lina Thomlinson at 11:00 AM

Well, if it makes you feel any better, they certainly look as though they were with the time it took. Love the fabrics, too.

That's not too promising considering I still haven't gotten any work done on the THREE I'm hoping to get done. I was hoping too that they would be a good go-to gift, but I'll wait & see how I do with them.

I am not a sewer but wow these look sooo cute! Joni

I love these--and I love the fabrics!

I've featured your bags (and the bunny ones too!) in this month's inspiration post!