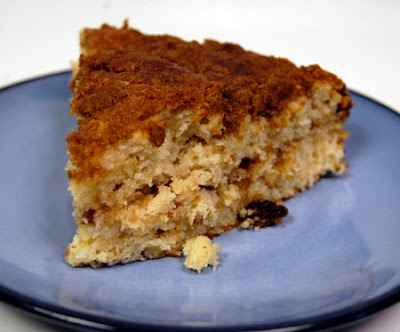 Yup, this creation is pretty much exactly what the name suggests and it's absolutely delicious! I know that I bake a lot, which is why I try to limit myself to only one or two servings of everything I produce, but with this I somehow found the excuse to have some both for breakfast at the beginning of the day and dessert at the end. I'm surprised by how buttery the cake tasted despite only using one stick of butter. And yes, I know I just further cemented my status as delusional when I use the word "only" to describe something that contains over 800 calories and about 90 grams of fat. Not to mention that I cleverly neglected to mention the additional 1/4 cup of butter called for in the streusel.

The cake on its own would be divine as it's light, buttery, moist, and flavorful. But add oats and layer it with cinnamon brown sugar streusel, raisins, and chopped nuts and it becomes irresistible. For good measure I also threw in some white chocolate chips, not called for in the original recipe but a brilliant idea if I may say so myself. Either way this is a must-try recipe!

Note: I don't own a 9" pan (as called for in the recipe) so used my 10" springform without any ill results. In fact, the slices were so thick that even if I had the choice I'd go with the 10" pan. 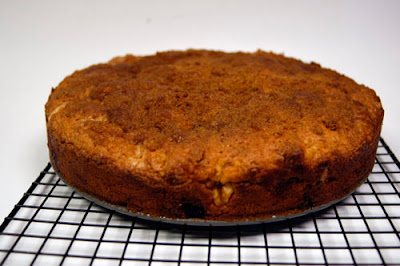 For the streusel filling/topping
1/4 cup flour
1 cup brown sugar
1/4 cup butter
1 1/2 tsp ground cinnamon
2/3 cup raisins
1/3 cup toasted pecans, chopped (I used walnuts)
1) Preheat the oven to 350F. Lightly grease a 9-inch (or 10-inch) springform pan.
2) In a medium mixing bowl, whisk together flour, quick cooking oatmeal, baking powder and salt.
3) In a large mixing bowl, cream together butter and sugar until light. Beat in eggs one at a time. Blend in 1/3 of the flour mixture, followed by half of the buttermilk and the vanilla. Then, blend in add half of the remaining flour, the rest of the buttermilk, and finally the last of the flour. Fold in white chocolate chips. Set aside to prepare topping.
4) For the topping, combine flour, brown sugar and cinnamon in a medium mixing bowl and stir well. Rub butter into the mixture with your fingertips (or by pulsing a a food processor) until mixture resembles coarse sand.
5) Pour half of the batter into the springform pan. Top with half of the topping mixture. Evenly sprinkle raisins and pecans in a single layer. Pour remaining batter on top and spread carefully to the sides of the pan. Sprinkle all remaining topping over the batter.
6) Bake in a 9-inch round springform pan
7) Bake for 45-50 minutes (adjust time if using 10-inch pan), or until a toothpick inserted into the center comes out clean. Allow cake to cool on a wire rack until it is room temperature before running a knife around the edge and removing the springform. Store in an airtight container. 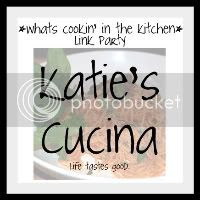 Posted by Lina Thomlinson at 6:28 PM

"OMG", YUMMY!!! and I'm going to try it in a BUNDT Pan... Start with a little batter, then a ribbon of the strudel(I'm going to use Semi Sweet chocolate pieces in the strudel) then top with the rest of the batter... YES, I would LOVE to start my day with this!!! YUMMMMMY, and thank you SO MUCH for sharing it!!!
Hugs to you,
Donna

This looks so delicious! I think I might make this tomorrow. It's supposed to be super-cold and I think this would make the house smell delish!

This sounds delicious. One of my favorite cookies turned into a delightful coffee cake. Thanks for linking this up to Sweets for a Saturday.