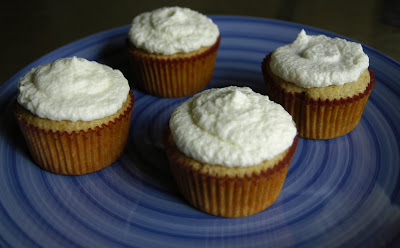 One of the popular entries in the Mystery Box tea-themed cupcake challenge is My Baking Empire's Orange Cupcakesicle Cupcakes. They're a creative blend of Tazo Wild Sweet Orange Tea with an airy orange cake. Since the theme of this post is "using up everything I have in my fridge and cupboards" I'll start by saying how thrilled I was to discover that I just so happened to have three Wild Orange Tazo tea bags left from a tea swap I did with a friend. Happy days! And clearly a sign that these cupcakes and I were meant to be together.

The cake recipe's a nice, simple one with no strange ingredients required. I had everything else on hand so I got to work first thing in the morning. The only change I made was using all three tea bags instead of the two called for in the recipe, which was probably a good move because the tea flavor is very subtle in the finished product. So subtle that my tea-hating husband happily chowed down on them without detecting a thing. Due to my more advanced palate I was able to taste some of the flavor of the tea although the orange zest is pretty strong and gives it a big citrus flavor. Because it calls for so much baking powder the cupcakes bake up a lot in the oven and the cake is nice and light. Just be warned that they seem to get stale quickly as a result.

I made major changes when it came to frosting the cupcakes. Not content with plain old whipped cream (I'm a frosting fiend!) I again continued in my quest to randomly use up half-empty containers of ingredients and made a whipped cream-based citrus topping. I added a few drops of Fiori di Sicilia, a flavoring with vanilla and citrus, and I think it nicely added to the taste while maintaining that cool texture of whipped cream the original recipe was going for. I'll be the first to admit that my recipe's not flawless and if I'd had more on hand to work with I might have been able to improve it but it works well with the flavor of the cake, which was all I really hoped for. It's a bit runny, too runny for piping and holding its shape, but if you're into the rustic look and or are in too much of a hurry to chow down to bother piping fancy shapes it'll do the trick.

2) Boil water and measure out slightly over 1/2 cup. Steep three tea bags in the water until cool. Remove tea bags, squeezing as much liquid as possible back into the measuring cup.

3) Mix together flour, salt, and baking powder and set aside.

4) Cream the butter and sugar in a mixer until fluffy. Add the vanilla and orange zest, and then each of the eggs one at a time – blending until incorporated. Make sure to scrape down the sides of the bowl as needed.

5) Add 1/3 of the flour mixture to the mixer, blend a bit until almost incorporated, then add half the tea, then more flour, the rest of the tea, then the rest of the flour until it’s completely mixed together. The important thing here is to start and end with the flour. Scrape the bottom and sides of the bowl with a spatula to make sure there’s nothing hiding down there that didn’t get mixed in.

6) Divide batter evenly among the 16 cupcake wells, filling each about halfway. Bake for 17-20 minutes until there's light browning on top and cupcake springs back when pressed.

7) Let cupcakes cool in pan 10 minutes, then transfer to a cooling rack and cool completely.

Let Me Rummage Around in the Cupboard Frosting

1) In a mixer with the whisk attachment, whip cream until stiff peaks form. Remove from bowl and set aside.

2) In a mixer with the paddle attachment, blend butter until smooth. Add marshmallow fluff one tablespoon at a time, blending after each addition.

4) Remove mixer bowl from the mixer stand and add whipped cream, folding in gently by hand. Spread onto cooled cupcakes and enjoy!

Posted by Lina Thomlinson at 7:48 PM

Maybe you can come and use my cricut and make me these cupcakes!! Lol!! They look really good!! Good job.

I'm glad you guys enjoyed them. I also love your "let me rummage around in my cupboard" frosting idea :) Marshmallow sounds like a fab topping!

Oh my! These look wonderful! Thanks so much fo adding them to Cupcake Tuesday!
~Liz