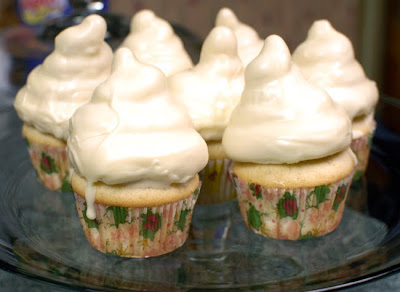 You may have noticed by now that I tend to use any major and minor holiday as an excuse to indulge. Valentine's Day is no exception and because the only presents my husband has on his wish list are big ticket items we skip giving each other gifts and I bake him something sweet every year instead. This year I got my inspiration when he bought a few of his favorite candy bars a couple of weeks ago. Many of you probably have no idea what a Zero bar is. Understandable. They're one of the few white chocolate candy bars out there so, like me, you probably pass them up in favor of something more, well, chocolaty.

(Source)
Candy Blog described the essence of the Zero bar far better than I ever could. "It looks like a bar of the future. Something that robots would eat. Or maybe robots would bring them to us. They’d enter the room through the shooshing automatic door with a tray full of snacks that we munch on while watching TV beamed directly into our optic nerve." It's a white fudge-coated bar filled with almond, peanut, and caramel in some sort of nougat-like configuration. Not bad but wouldn't those flavors be even better as a cupcake? A cupcake covered in a ridiculous amount of frosting and then dunked into chocolate? Heck, wouldn't anything be better with that particular treatment? 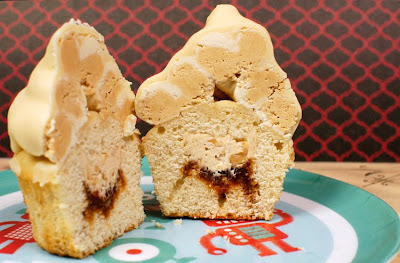 Thus was born the Zero Bar Hi-Hat Cupcake: Light and fluffy almond-flavored cake filled with both peanut nougat and caramel, a blend of white chocolate and peanut butter frosting piled high on top, then dipped into a white chocolate coating. Even I thought I was going a little overboard with this one.

Despite being a bit of a Herculean task to eat one of these cupcakes the flavors all shine through nicely. I had to interrogate my husband to see if it was at all reminiscent of a Zero bar and he confirmed that it is. Mission accomplished!

As a side note, I noticed while mining previous blog posts for frosting recipes that many of the cupcakes I make are absurdly complicated. To the point where they probably put off most of you readers from ever attempting any of them. I think I should point out that if you're not feeling as ambitious as I you could usually make substitutions to save a few steps. For example, with these cupcakes there's no reason why you couldn't use store-bought caramel or even just stick a piece of a chopped up Zero bar into the middle of each cupcake instead of making the filling. Believe me, there are plenty of recipes I look at online and think I would never be skilled enough or want to put that much time into baking something. I don't want my recipes to be the kind that get ignored for that reason. 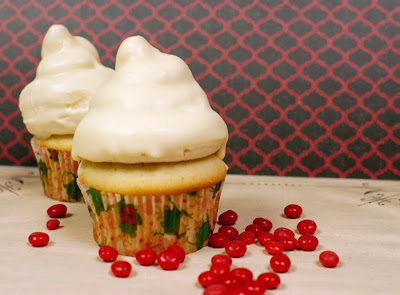 2) In a large mixing bowl, whisk together the sugar, flour, baking powder, and salt.

3) Add the butter and beat with an electric mixer at low speed, until the mixture looks sandy.

4) Combine the milk, vanilla, and almond extract and add, all at once. Mix at low speed for 30 seconds, then increase the speed to medium and beat for 30 seconds. Scrape the bottom and sides of the mixing bowl.

5) With the mixer running at low speed, add 1 egg. Increase the speed to medium and beat for 30 seconds. Add the second egg, again beating for 30 seconds.

6) Scrape the bottom and sides of the bowl, and beat briefly, just until smooth.

8) Bake the cupcakes for 23 to 25 minutes, until they've domed, and are a light golden brown around the edges. They'll spring back when pressed gently on top, and a toothpick inserted in the center will come out clean.

1) Melt the sugar over medium heat in a large pot. With a wooden spoon, stir the sugar as it melts and cook until it becomes a deep amber color.

2) Add the butter and salt and stir it in until melted.

3) Pour in the heavy cream (mixture will foam) and whisk until you get a smooth sauce. You may have some lumps but keep stirring until they have melted. Remove from heat and let cool slightly.

2) Using the cone method fill each cupcake cavity half with caramel and half with nougat filling. Be sure to trim the excess cake off the bottom of each cone and replace just the top portion to cover the filling.

2) Beat the butter and powdered sugar until creamy. Beat in the chocolate and continue to beat at medium-high speed until fluffy.

3) Using a spatula "paint" white chocolate frosting on one side of a piping bag and peanut butter frosting on the other side. (I found that my frostings kind of blended together despite this method working with other recipes in the past, so there's really no need to be precise here. You won't be getting that two-tone effect anyway from the frosting so feel free to just jam it all in there.) Pipe onto cupcakes using a large round tip in a tall spiral pattern.

4) Put the cupcakes in the freezer while you make the white chocolate coating.

2 cups white chocolate, chopped
3 tablespoons canola or vegetable oil
1) Combine chocolate and oil in a medium heat-proof bowl set over a medium saucepan of barely simmering water; stir until melted and smooth. Transfer to a small bowl, and let cool about 15 minutes.

2) Holding each cupcake by its bottom, dip cupcake in the chocolate to coat frosting, allowing excess to drip off. Transfer to a baking sheet fitted with a wire rack. Spoon more coating around edge of cupcake and any exposed frosting; none of the frosting should show. Let cupcakes stand at room temperature 15 minutes before eating.

Posted by Lina Thomlinson at 8:13 PM

What a cool idea! Thanks for sharing on Cupcake Tuesday!
I've pinned them on my Cupcake Tuesday Pinterest Board!
http://pinterest.com/hoosierhomemade/cupcake-tuesday/
~Liz