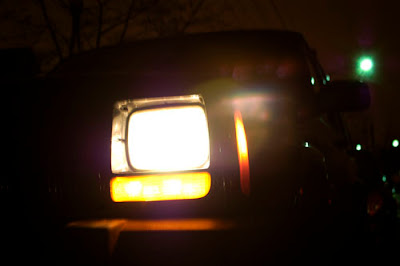 Well, today was a traumatizing day. There I was, breezing back to work after my lunch break when I saw one of the mutant wild turkeys that's taller than the hood of my Mini bolt out into the street, as they are wont to do around here. Now, everyone who lives around here knows that they frequent that area and I myself nearly had a run-in with one when it burst out of some tall weeds into the road. I managed to stop in time and it fluttered off unscathed. Unfortunately, the same fate was not in store for today's turkey.

It's true what they say about traumatic events seeming to happen in slow motion. I'm sure the entire event took less than a minute but it felt like an eternity as I watched it all unfold. I saw the woman in her big yellow car come bearing down on the turkey, not slowing at all until he was under her car. Then, inexplicably, I saw her continue to roll forward as the poor thing thrashed around in terror and pain, trying to get away from the car that was attacking him. At that point I noticed she'd been on her cell phone with a cigarette in the other hand, which explains why she hit the critter at full speed. I don't know if she kept driving because she was still reacting or because she was trying to herd him out from in front of her car, which is how it looked from my perspective. He managed to drag himself out of her lane as far as the middle of the street, where he collapsed because his legs were obviously not working. He proceeded to sit there and I could see his beak opening and closing as he called out and feathers that had been knocked loose blew all over the road. Once he was clear of her path the woman swerved around him and drove away. By the time I got off the phone with the police he'd curled up and stopped moving, whether from fear or because he'd died I'm not sure. Either way I was so shaken up by watching an animal suffer like that. I know wild turkeys are not the most attractive creations God has come up with and around here they are seen as a bit of a nuisance but it was still sad to witness.

There's no way of knowing if this could have been avoided had that stupid woman not been talking on her phone as accidents happen to even the most alert drivers, but it galls me how many people are arrogant enough to think that they can drive and talk on the phone at the same time. Don't even get me started on people who text and drive as I think they're a whole new breed of stupid. Any of us could operate a motor vehicle while half asleep. Steering and braking aren't that difficult, after all. It's all too easy to zone out while on a monotonous commute but it's the unexpected things that might crop up that require our full attention. How many times has the person in front of you suddenly braked, you've been cut off in traffic, or your car skidded on ice? And those are minor, almost weekly occurrences. Never mind the rarer but entirely possible incidents like today where an animal or, God forbid, a child runs out in front of your car. The simple fact is that humans have terrible reflexes and reaction times. Add to that the limitations of whatever car you're driving and you could easily wind up killing something or someone. Why deliberately do something, something that is completely avoidable, that will inhibit your response time?

When driving the most important thing you can do is pay attention. If you're in the driver's seat your commute is not an opportunity to catch up on your texts, apply your makeup, or fish around in the backseat for whatever item you absolutely have to have while barreling down the road at 40+ MPH. I'm sorry if I've ranted too long or sound too preachy but today's incident really bothered me and it's hardly the first time I've witnessed crappy driving only to discover that the offending driver is chatting away on her cell phone. Maybe it's because my mom instilled in me the notion that a motor vehicle can be a weapon or maybe it's because I vividly remember the cheesy but haunting videos we were forced to watch in driver's education but when I'm driving I consider my number one job to be to pay attention. Now if only everyone else out there on the road would agree.

RIP, little guy. You may have been pretty ugly in this life but for your troubles you may come back as a supermodel. Hopefully one who isn't accident prone.
(Source)
Posted by Lina Thomlinson at 7:43 PM

so, deer. we are wont (!) to have deer round these parts, and they actually tell you that if a deer jumps out in front of you, you have to keep driving. to try and brake, or even worse, swerve, is actually worse. people swerve into traffic all the time around here trying to avoid deer. and deer are way cuter than turkey, so you see, it must be done that way. they say that about squirrels too. people slam on their brakes for a ridiculous squirrel, and then get into an accident. if it's me or them, it's gonna have to be them.

please keep in mind i am a huge animal lover, and in no way am i condoning harming deer, squirrel, or hideous turkeys.

I wish I had a scrolling electric sign that said things like, "get off the phone", "stop cutting people off","you are driving too fast for this area", etc.

I would have my co-pilot (child) flash the appropriate sign at the offensive driver.

And by "big yellow car" I am assuming you are talking about some type of SUV. Oh how I dislike them. And I have a pure HATRED of Hummers- so happy they aren't making them anymore. There is no reason for anyone to drive in a hummer unless you are in the military. And most people don't need huge SUVs either.

I understand what the cape is saying; it's better to kill an animal than kill someone else. But the situation you describe was more out of idiocy than for self-preservation.

Wooh... thanks for letting me vent about this.